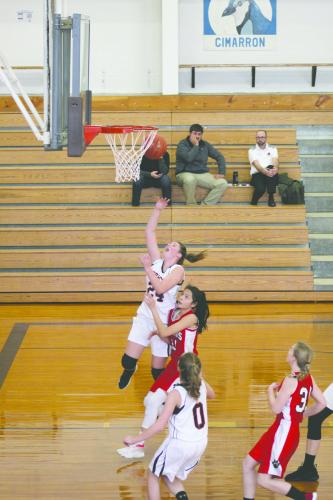 The junior high boys and girls competed in the Hi-Plains League basketball championship from February 5-8. Both the A and B boys teams played well enough to qualify for the championship games that were played in Meade on Saturday the 8th. The A boys competed hard but fell short against a solid Meade team losing 36-46. The B boys played extremely well on both sides of the ball and won the league championship defeating Sublette 37-20.

“I’m extremely proud of how both of these teams competed throughout the week and also how they represented our community in the process,” said Coach Jeff Mathias. “The boys have worked extremely hard all season and showed steady improvement throughout. The A team’s championship game loss was the first loss our program had experienced since a December 19th matchup with Stanton County. The boys took great pride in winning at every level and supported each other accordingly.” The A boys finished the season with an overall record of 11-4, B boys were 13-1 and the C boys were 8-3.

The junior high girls A team played Sacred Heart and won 24-17. They moved on to play Lakin. It was close until four minutes was left in the fourth quarter. Lakin defeated Syracuse 42-31.

“The girls played hard, adjusted well defensively,” said Coach Amy Norton. “You never know how a team will do playing back to back.”

Normally the girls play together, but in tournaments the teams are split.

The B team played the Stanton County Trojans, losing 20-16.

SHS Senior Hannah Jo Lampe is headed to State  Golf. On Monday afternoon at Regionals, Hannah  shot 101, placing her tenth. Lampe heads to the two day tournament in Cheney on October 20th. She will compete against 9 teams and 63 golfers, all from 3A to 1A schools. ... [More]

The Lady Bulldogs volleyball team traveled to Goodland Saturday, October 3 for the high school tournament. The event was originally scheduled at Oakley but was moved because of COVID.  The ladies started the day by dominating Triplains Brewster, winning in two; 25-14 and... [More]

Hannah Lampe took second in the Varsity Girls Golf Tournament in Syracuse on Tuesday. She shot a 96. There were 37 girls from eight schools. Lampe said, “It feels great.” Varsity golfer Charity Maune did not place. JV plays on Thursday here in Syracuse and Varsity... [More]

In case you haven’t heard, the Syracuse High School Bulldogs football team is 3-0, having defeated the Stanton County Trojans 27-0 on Friday night. It’s the first time the Bulldogs have been undefeated since 1999 with coach Mickey Sharon.  Some of the highlights... [More]

The Syracuse jr high volleyball team faced Elkhart on Thursday, September 10. Then they traveled to Lakin Saturday, September 12 for their first tournament of the season.  According to head coach, Rhoni Gould, the girls showed great improvements.  “They are getting... [More]

The SHS Bulldog football team faced the Sublette Larks at Sublette on Friday, September 4 for their season opener. The Bulldogs held the Larks for a final score of 25-0.  The Bulldogs are coached by Jordan Irsik, assisted by Jordan Wahlmeier, Casey Finlay and John Le. ... [More]

I wrote out my column last weekend with fury at the divisiveness of our country and our community regarding the election. How we seem to have forgotten our brothers and sisters simply have different perspectives on how to handle crisis and politics. Then on Sunday night, a... [More]

Sometimes you win sometimes you learn. I love this saying. It says if you lose there is a purpose to it. Easy to say, hard to do. I am not the best at being wrong. For many years I blamed, deflected, argued. I see it today on social media too. I see a lot of “Well they... [More]

Do you “have to” or do you “get to”? My daughter and I are listening to the audio book, Little House on the Prairie, as we drive here and there. Ma Ingalls was outside washing the clothes in a tub or by the river? I was busy trying to find where I was... [More]

The stories in this week’s paper inspire me. Throughout you can read how people in our small town have lived and are living what I believe the United States is and should be about. On the front page there are several stories, each describing a different aspect of the... [More]

My family has an interesting communication style. We just stop talking. My grandfather and his brother stopped talking for 25 years because of a card game. My father just stopped talking to me for weeks at a time and I would have to guess why.  It ended up being years before... [More]

I have really been battling this week with standing up for what I believe in and still loving my brother or sister. What a hard line to walk. I don’t imagine I am the only one. I work hard to try to be loving and kind and understand that everyone I run into is doing their... [More]

Who's Doing The Dishes?

Isn’t it easy to see what others are doing wrong? Don’t you just want to go tell them how to do it better? Joyce Meyer is a pragmatic preacher  I have followed for many years. One saying she has is “you can’t help someone else if you have a sink full... [More]

A guy called yesterday about my google ranking. I don’t put much energy into my internet search engine ranking because the newspaper is local and not looking to be famous. I just need people to be able to find the Syracuse Journal if they are looking for it.  But... [More]

Worn and weary firefighters battled a blaze throughout Sunday night as Davis Motors burned to the ground.  At 11:03 pm on Sunday, the Syracuse Fire Department was paged. A worker at Eagle saw the flames and called it in.  “The whole north side of the shop was... [More]

At 11:03 pm the Syracuse Fire Department was paged. Davis Motors was in flames. “The whole north side of the shop was already engulfed,” said Fire Chief David Stimatze. Hamilton County Fire Department was called for assistance as well as Stanton county, Greeley county... [More]

Theatre Opens To Down East Boys

While the Northrup Theatre has been dark since March, it came to life Monday, October 12 with a performance from the Down East Boys gospel music quartet from Reidsville, NC. With much dusting, mopping, and scrubbing from manager Craig Norton and his brother-in-law Keith Roberts,... [More]

Last Day to Register to Vote

Today, October 13th is the last day to register to vote for the November election in Hamilton County!  Registration cards are available at the Clerk’s office, 219 N Main St or you can register on the website wwww.ksvotes.org

Throughout several weeks you may have seen the sports page with Team Tori signs at volleyball games, track meets, on t shirts, and anywhere they can to show the community’s support for Tori Mathias battling for her life with cancer. Social media posts asked for prayer from... [More]

The 4-H youth of Hamilton County is doing a needs drive for the Hamilton County Food Pantry.  We will be doing porch/church pick-up on Sunday, October 11th starting at 4 pm.  Text (preferred) or call, Katie Dinkel to schedule for your items to be picked up at 620-384-9549.... [More]

Francis Andrew Younger, 79, passed away Saturday, October 24, 2020 at Clear Creek Care Center in Westminster, Co.  He was a longtime resident of Syracuse, KS.  To friends and family, he was known as Frank. He was born October 18, 1941 in Victoria, Kansas,... [More]

Wanda May Finkenbinder Stallings, recently of Dodge City, Kansas, went to be with our Lord and Savior, Jesus Christ on Wednesday, October 21, 2020.      Born April 9, 1935 to Albert and Lola (Baldwin) Findenbinder, she grew up as a farm kid during the Great Depression,... [More]

Sheryl Ann Rudy was born July 21, 1949 in Syracuse, Kansas, to Helen and H.  Milton Rudy. She was welcomed home by two older brothers, Nelson and Royce. She died of complications from coronavirus on Oct. 6 in Olathe at the age of 71 -- and was once again welcomed home by... [More]

Lois Evelyn Whaler, 80, died Wednesday October 7, 2020 at her home in Garden City. She was born August 23, 1940 in Horrace, Kansas the daughter of Leonard and Marie (LeMaster) Wallace. She attended school in Tribune until she met her husband Levi. They were married July 15,... [More]

Rev. Dr. Earl Hoffman Estill 84, of Lewisville, Texas, formerly of Sterling, Kansas, passed away September 27, 2020 at his home. He was born December 18, 1935 in Philadelphia, Pennsylvania, Earl H. Estill became the son of Thelma A. and Earl H. Estill. He lived in Philly and... [More]