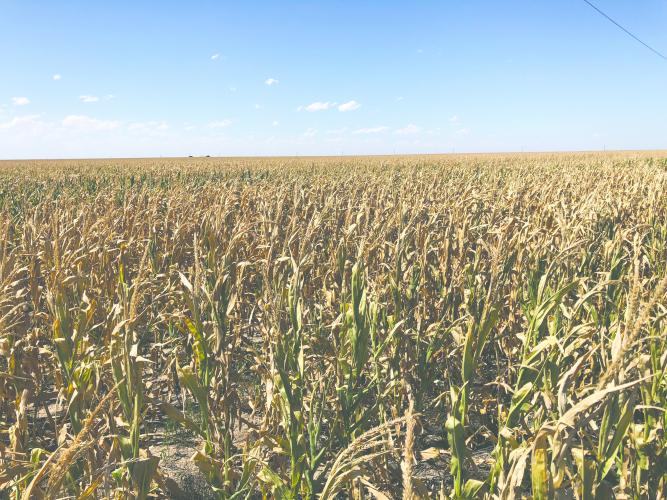 It was a long, long wheat harvest because of continuous rains. Fall crops looked well despite some hail damage.

Today many dryland fall crops that looked like a bumper crop, set to be harvested in the next month or two,  look gray and are dying.

Dryland corn is normally harvested in the latter part of September but with the intense heat and lack of moisture it looks like it could be one to two weeks early.

The picture above shows corn that should be green in color and maturing. The leaves have turned brown and are flashing. Flashing (dying from lack of moisture).

On the above right picture, you see a closeup of corn aborting kernels. The corn you see was from when we had abundant moisture.

The kernel sites were pollinated. Then with the environmental conditions of high heat and lack of moisture, they appear to have aborted 70% of the kernels that had been initiated.

Milo will still be harvested at normal times but if conditions continue yields will continue to decline. It has already suffered in the last week.

Everything has taken a hit recently.

The farmers out there watching their corn, milo and soybeans are nervous and hopes for a bumper crop have been dashed with each hot triple digit day that passes.

Chase Keller said, “I’d say earlier on in the growing season (June-July), the corn and grain sorghum showed signs of great potential throughout majority of the county due to the very appreciated rains that we had received before and during the growing season. However, the past few weeks of high degree temperatures and small amounts of scattered rainfall has started to show moisture stress on fall crops throughout the county. The corn and sorghum could sure use a good rain or two to help get us through to the end!“

Darrin DeWitt said, “The northern half of the county is holding fair. The southern half is really starting to suffer. We’re going to lose a lot of bushels this week with the heat and wind. If the rains wait much longer we won’t be waiting at the elevator.”

Jess Schwieterman added, “In our Sunday afternoon crop tour we found highly variable crop conditions. Some fields with ears or heads some without.  At least there are areas that look decent.“