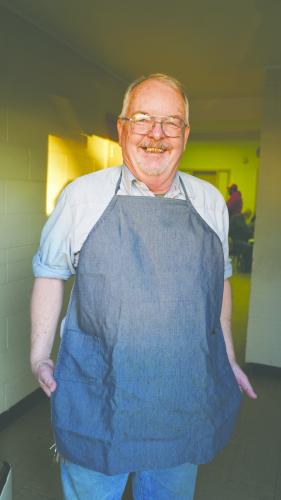 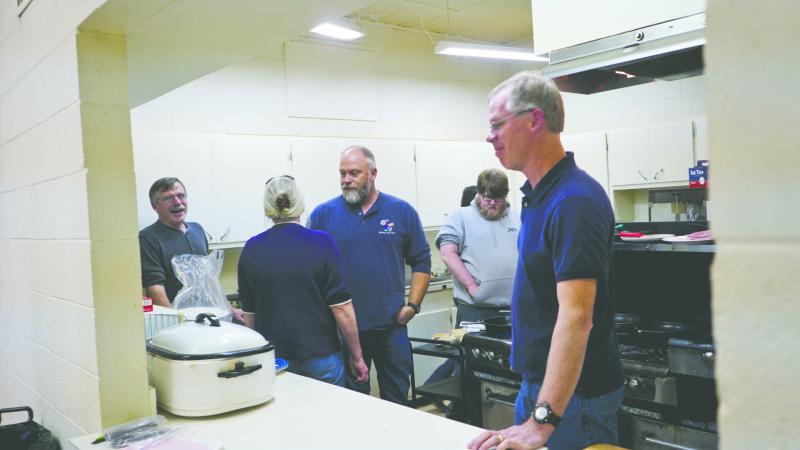 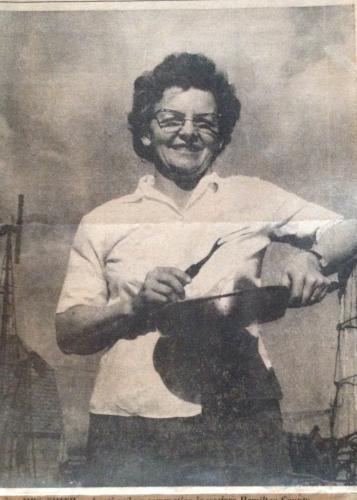 Bud Smith dons his mother’s apron to cook for the evening. With tears in his eyes, he fondly shares memories of his late mother, Helen Margaret Gerard Smith, also known as Margie or Marge Smith, and their pancake supper history, “This was my first job, breaking eggs for my mom for the pancake supper. They are still  using mom’s skillets.”

But the supper was more than that. Tables decorated with chocolate hearts, a cake for Don Gerard’s 92nd birthday, and laughter spilled from the kitchen.

All who entered to eat left with smiles. Kids of all ages visited and shared their memories.

Cindy Carson, Bud’s sister, was busy watching her grandson, Ryan, at the Inman Scholar’s Bowl last Saturday night, but she recalls years of working at the pancake supper. “I waited tables, washed dishes and now that you mention it, I remember cooking roasters full of sausages for the supper. My house smelled good!”

The 11 Smith children  grew up just a half mile north of the Greeley-Hamilton county line by the Colorado border. They attended the C-4 school and later the Coolidge school. Rose was the last graduate in 1969 before the school shut down.

Back then there were cherry pie contests and they each made one. The winners competed at state.

Marge Smith’s prizewinning legacy of cooking and family culminated with her starring in two 1965 Crisco commercials featuring ribbons from the Hamilton County Fair. One was by herself, as Mrs. Forrest Smith, and the second was with her two daughters, Cathy and Carol, cooking fried chicken and french fries.

“We didn’t have a television in our home. So my mom watched it at Grandma and Grandpa Gerard’s.”*

The Gerards were in the kitchen cooking as Don visited with the public.  “We were thrilled with the support,” said Lori Lennen. “The supper has been going on for probably been over 40 years. “ 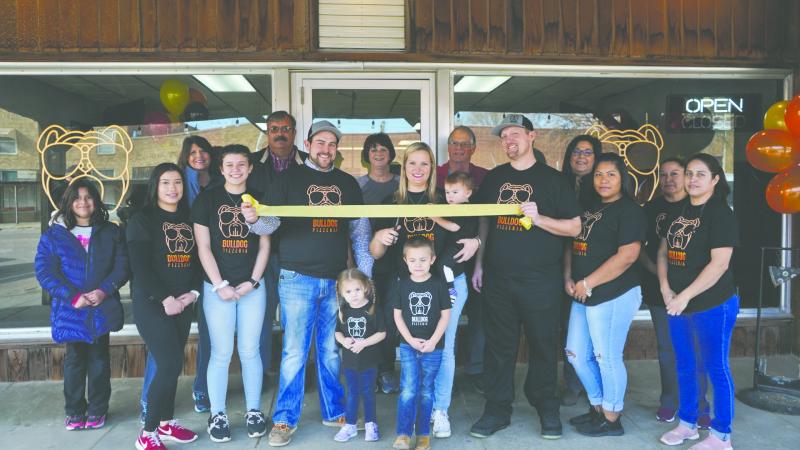 It’s always a great boost to local economy when a community supports its local businesses. The Bulldog Pizzeria held their grand opening last Saturday. With a salad bar, pizza buffet, and a remodeled interior, the pizzeria had every seat in the house filled. Giveaways,... [More] 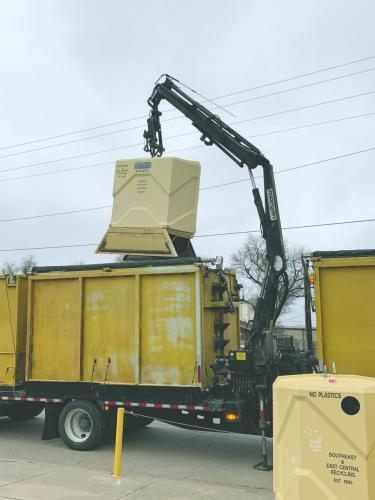 Approximately six months ago residents of Hamilton County had the opportunity, once again, to recycle.  In the mid 1990’s the Chamber of Commerce, with assistance from the City of Syracuse, formed a recycle center next to the City building.  Due to the inability... [More] 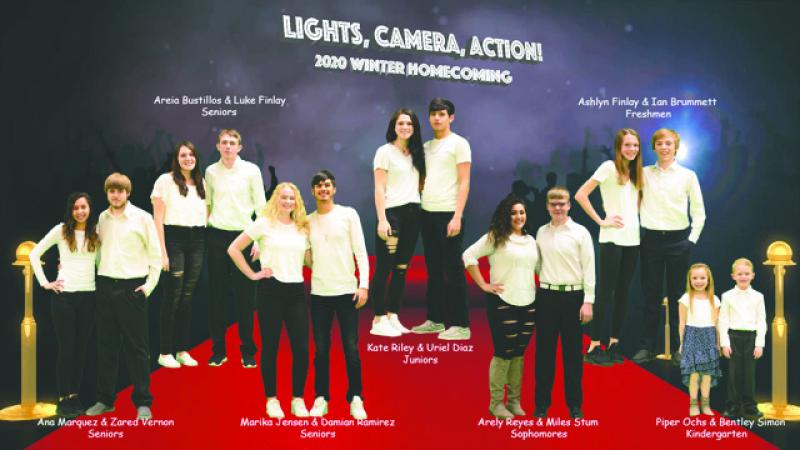 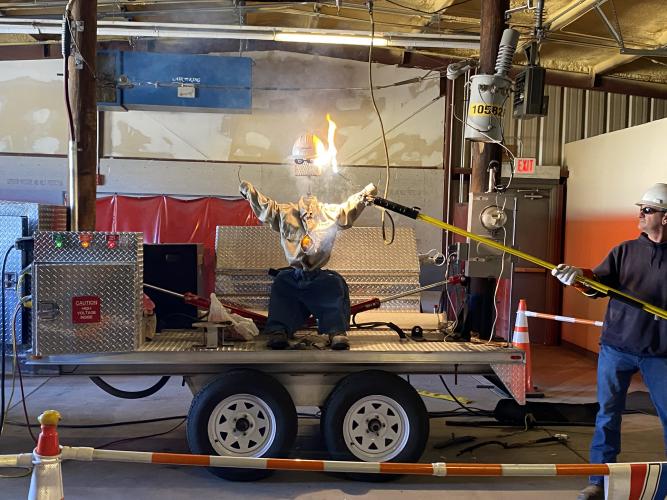 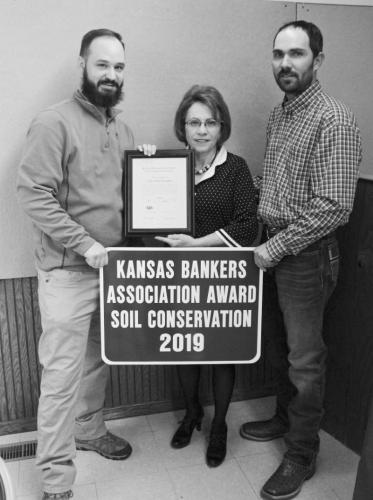 Valley Memorial- Holly, CO Funeral Services for Michael Wayne Nichols will be held at 2:00 p.m. on Friday, February 21, 2020 at the Syracuse Wesleyan Church in Syracuse, Kansas with Pastor Ray Frank officiating.  Interment will follow in the Syracuse Cemetery.  Visitation... [More]

Mona Rae (Alexander) Trussell, age 82, passed away at the Kearny County Hospital in Lakin, Kansas on Monday, January 27, 2020. She was born on September 17, 1937 in Syracuse, Kansas, the daughter of Roy Elmer Alexander and Jewell Wilma (Rogers) Alexander. She attended Kendall... [More]

Dale Leon Pruter, 64, of Great Bend, Kansas, passed away Tuesday, February 4, 2020 at his residence. Dale is the oldest son of Orville and Betty (Zweifel) Pruter of Natoma, Kansas.  He was born January 19, 1956 at the Plainville Hospital.  Later he was joined by four... [More]