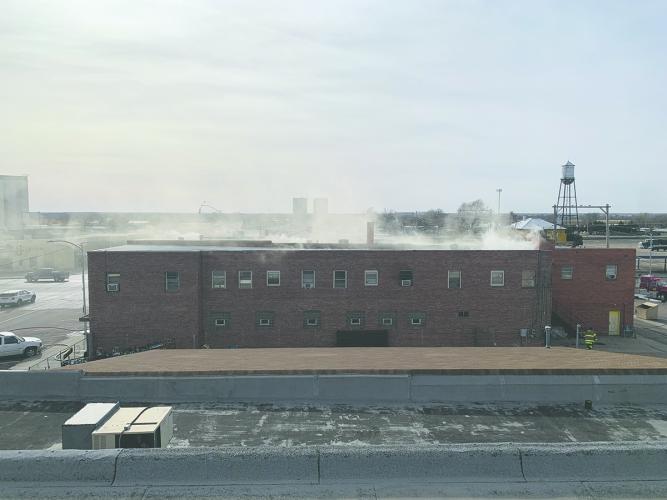 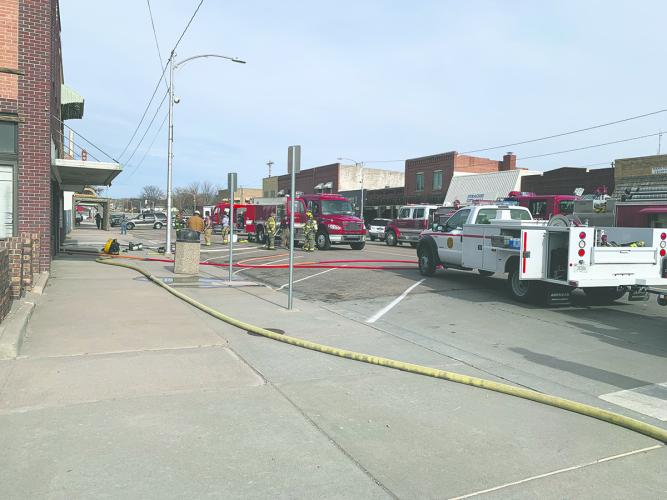 On Saturday morning, a fire broke out in an apartment building just north of Q’s Corner Donut Shop, owned by Claudio Sulca. Sheriff Mike Wilson said, “The initial 911 call from individuals came in at 11:14 AM. When they arrived at the scene, there was smoke coming out of the windows.”
Officers dispatched the City of Syracuse Fire Department and EMS. City Fire Chief David Stimatze was out of town. County Fire Chief Ed Baker took the lead and called for surrounding area firefighters to help. Greeley County, Stanton County, and Kearny County all sent assistance.
Krista Norton said, “Upon arrival at the scene, smoke was coming from the roof and windows of the apartment building. Looking at the roof from the Northrup Theatre, smoke was out of the vents and some fire could be seen from one of the upper-level windows on the center on the north side.”
She continued, “Emergency Management Coordinator, Steve Phillips who helped assess the situation, moved cones, got trucks where they needed to go, and helped where he could since everyone who arrived had a specific duty.”
While the firefighters were battling the blaze, county fire filled oxygen tanks, Wheatland Electric secured the scene  using their bucket truck, and Atmos Energy worked to make the area safe for workers.
Norton witnessed the efficient coordination of Wheatland Electric, Atmos Energy, Emergency management, City and County Fire Departments and more.
“I was in awe of how everyone had a job or duty, did it efficiently, helping to insure the safety of all of those involved.”
Two residents were transported to Hamilton County Hospital with minor injuries.
The American Red Cross was here Wednesday to help  assist the displaced residents. Some who were not available to meet are being contacted by phone.
A short form is filled out to offer residents assistance with everything from replacing eyeglasses, medications, or clothes lost in the fire, to contacting a pastor to speak with if they wished. Those who fill out the form can receive monetary assistance in the form of a card. It can be used for food, clothing, necessities. If it is used for alcohol, cigarettes, or firearms, the card is immediately turned off.
How is the building itself?
City Fire Chief David Stimatze said, “The electricity is shut off, so is the water. The building itself was not harmed. However ceilings were taken down to make sure the fire didn’t spread. You never know if fire is in the ceilings or the walls. The concrete rafters saved the main structure. If it was wood it would have been a total loss.”
He added, “There are nine apartments. One apartment had major damage. The hallway and a couple apartments have minor damage. Most rooms have smoke damage.”
Sulca has no insurance on the building.
Sheriff and deputies helped with traffic, spoke with residents, and got them some food and other needs they had.
Translators have been on hand to help with needs. Many have offered clothes from the Budget Shop, toiletries, food, and more.
Wilson would like to thank the community for their help.
The Fire Marshal has been contacted to see how they can be of assistance as well.