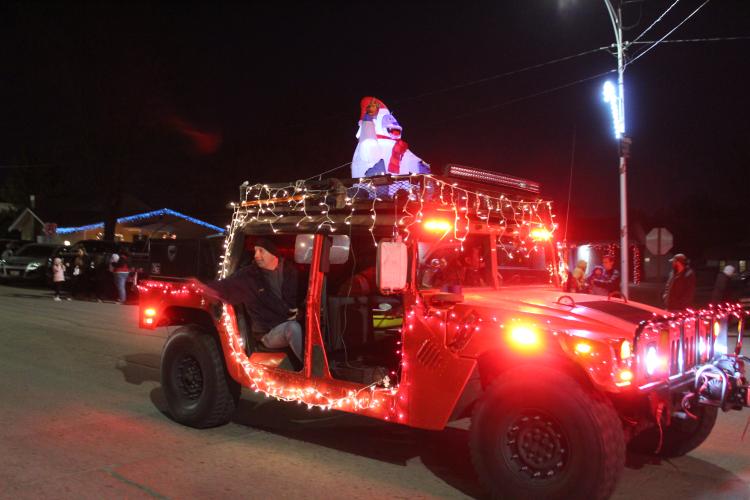 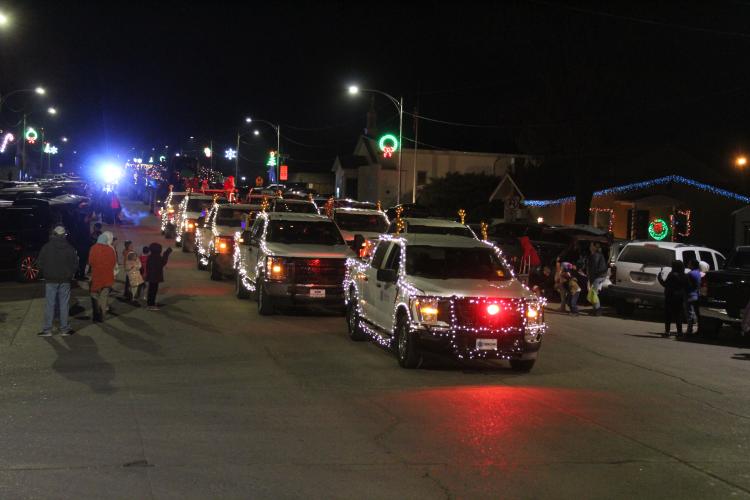 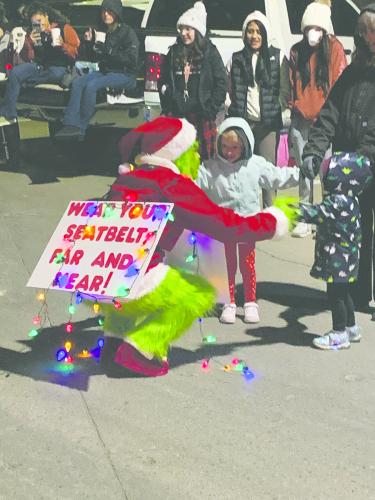 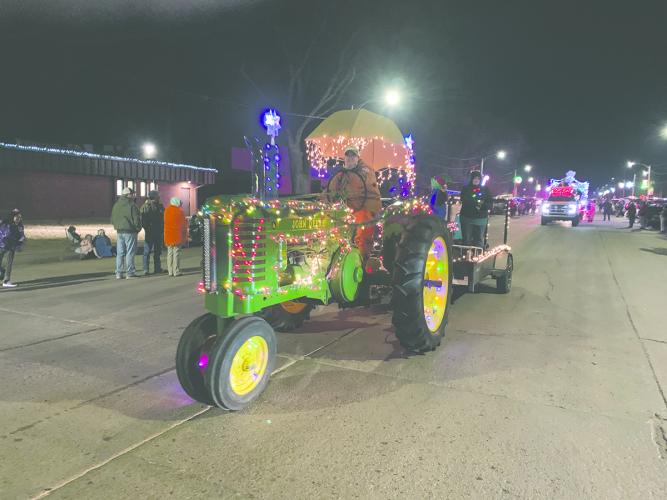 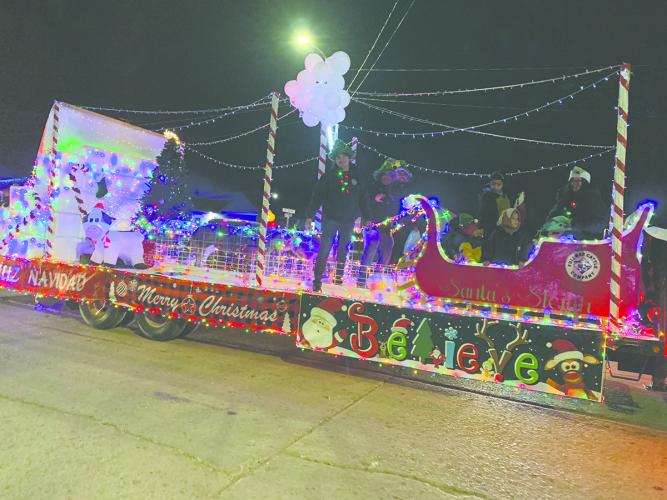 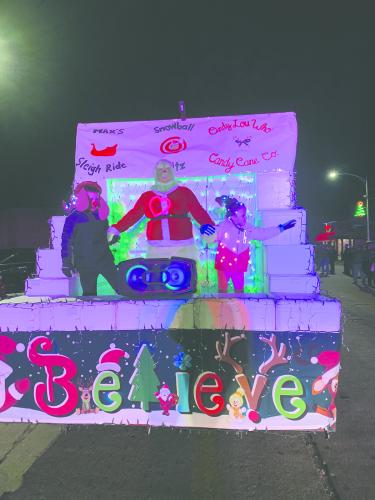 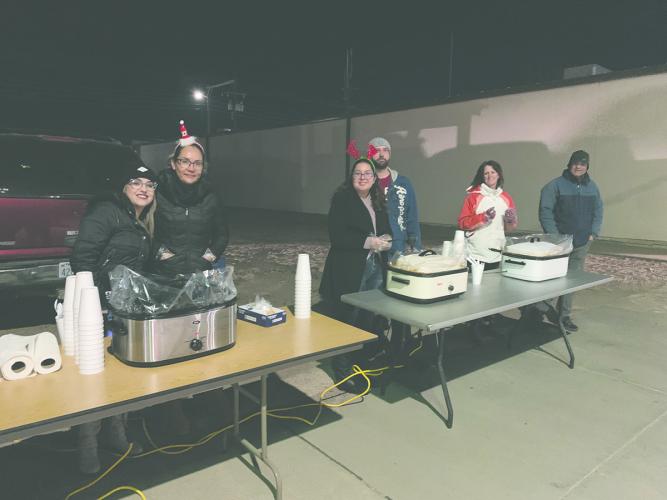 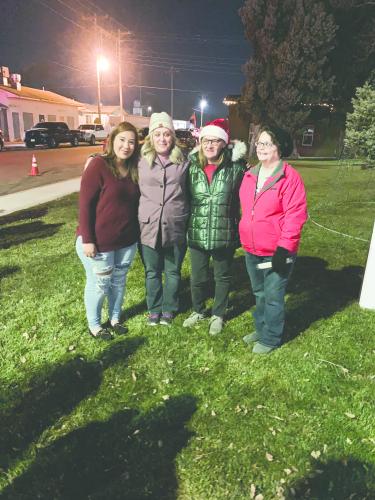 Main Street was lined with people young and old anticipating the Annual City of Syracuse’s Parade of Lights Wednesday, December 7. While waiting, Dream First Bank, served  three roasters of chili, inviting everyone to enjoy a warm bowl and follow up with hot chocolate and cookies provided by the City of Syracuse, and organized by city office employee, Daliz Oquendo Marquez.
Floats, tractors, reindeer and sleighs gathered at Hilltop Lanes. Organizations, individuals, churches, and businesses put in many hours of work for the community to enjoy.
This year, there were 14 entries, several included multiple vehicles or people. The Grinch made multiple appearances, but his attempt to ruin Christmas was overpowered by the happiness in the crowd.
The first place float was “Merry Christmas” by Fullmer Cattle. The cab of the pickup pulling the float had a “chimney” which was built around the sunroof. Santa would greet the crowd by popping up through the chimney.
Their float included a sleigh, inflatable calf, and live baby calves dressed up like reindeer. An elf and calves in costumes spread cheer down the parade route walking alongside the float. The back of the float was the Grinch, wearing a Santa Suit, Cindy Lou Who and   Max the Reindeer with the word BELIEVE in bright colors below the characters.
Second place float was the Saint Raphael Catholic Church, themed, “The World Needs a Stable Influence” with the Nativity high upon a bale of hay surrounded by children with bright smiles to give away, in addition to candy.
Third place float was Syracuse Food Center, themed, “Feeding the Christmas Spirit”. The front held a gingerbread house named Santa’s Food Center and behind was a Christmas tree with Santa greeting the crowd. One could not miss the bag of Doritos walking alongside the float.
Mayor’s Choice award went to A+ Auto and Diesel, themed “Automotive Christmas”. Ebben Urie’s Mazda Miata appeared to be a sleigh. The sleigh had a vintage wooden look, decorated with white lights, glowing green underneath ,and was pulled by reindeer and a large inflatable snowman in the lead.
Skyland Grain took home the prize for Best Decorated Non- Float, themed “Santa’s Sleigh and Reindeer”. Their fleet of vehicles, each outlined with white lights, were led by “Rudolph” with a bright red light on the front. The rest of their fleet followed double file with the name of each reindeer on the bed of the pickups. At the end of the fleet was “Santa’s sleigh”, a 1950s Ford pickup outlined in white lights, depicting a sleigh.
Others participating in the parade included an incarcerated Grinch, the Hamilton County Sheriff, Engine Number 1 Hummer, City Fire Department. Peppermint Patties ATV, Sherri Rome and Nikki, Bumper 2 Bumper van, And Three were Shepherds, Mia Boy with Isabelle Battin, Ivy Mathias, and Jillyanne Riley, and two sheep. Syracuse Flying Service, American Implement, a county fire truck, and the Hamilton County EMT.
Following the parade, people gathered at the park downtown next to Wheatland Electric, in anticipation of the lighting of the evergreen tree planted in memory of long serving city councilman, Gano Schmidt. Next to it were small green wooden Christmas trees strung with lights ready to be lit.
The electrical box nearby was decorated with a large candy cane, ready for representatives from the Hamilton County Food Pantry, Irena Owens, Ra Vernon, Chris Squire and Griselda Sigala, who had the honor of lighting the tree. Their work in feeding those struggling in hard times was noted.
City Clerk Linda Dinkel said, “I continue to be overwhelmed by the participation from the spectators to parade entrants who put in so much time decorating their entries,” she adds, “The Dream First Bank serves free food every year and all the people downtown are in a great mood!”
But Dinkel admits it takes many people to help make the parade a success from community volunteers to the City of Syracuse crew who hang the lights on Main Street and make sure the park is decorated in preparation for the festivities.