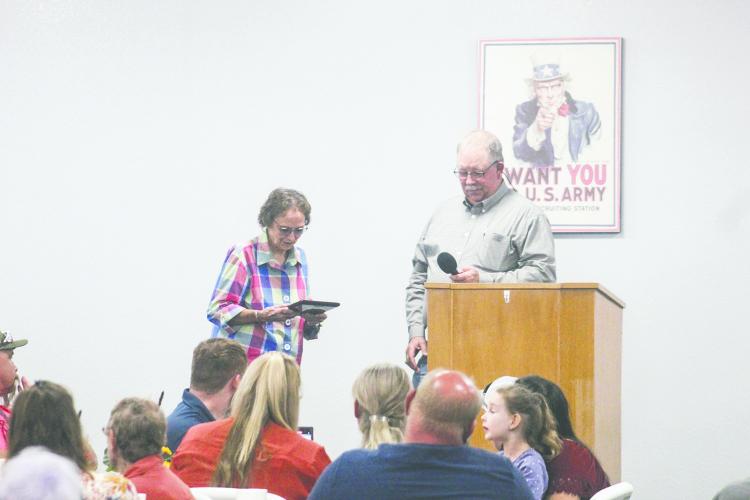 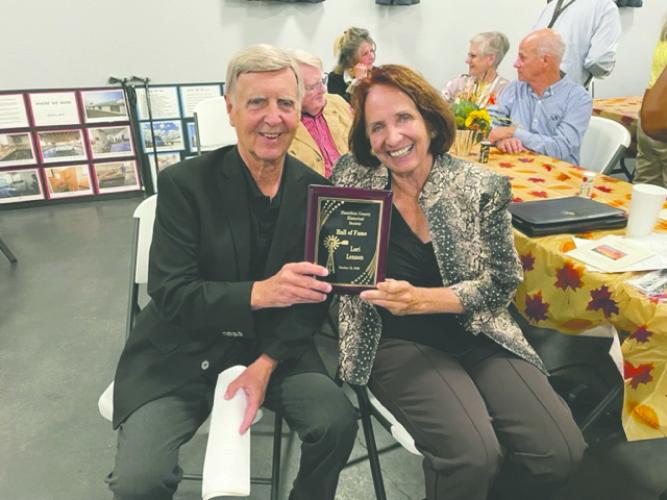 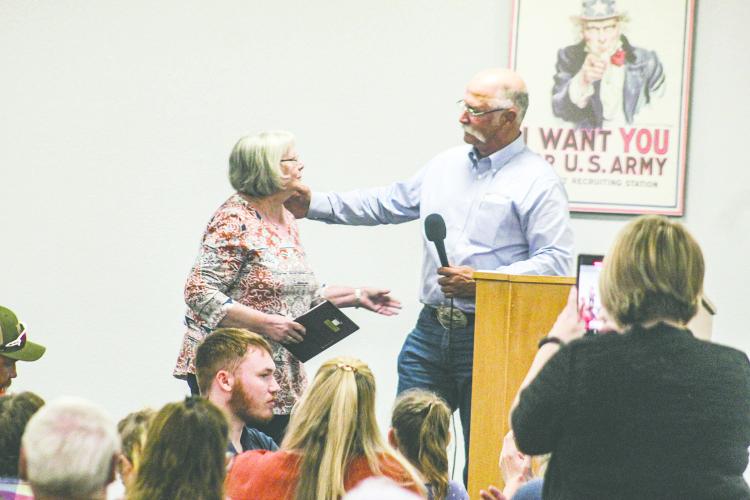 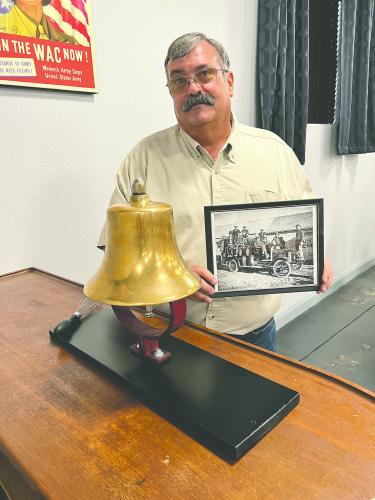 Saturday night at the Veteran’s building, approximately 75 people came out to the Hamilton County Historical Society’s Annual Meeting and Hall of Fame Induction. It was a big night that began with museum director Hunter Rodriguez welcoming guests. She has been doing wonderful things with social media, her column in the Syracuse Journal and much more. Rodriguez said, “This year’s Annual Meeting and Hall of Fame Induction turned out great. I think it was a memorable night for everyone.”
It was memorable – complete with laughter, joys, and tears. A multigenerational gathering included Garland Smith’s family, Michael Lennen and more.
Mark Davis shared his donation to the museum of the bell from the first horse drawn fire engine that Dorothy Scott, City Clerk from 1948 to 1974, saved from being discarded. He encouraged others to find pieces of Hamilton County history and donate it to the museum for all to see.
After a delicious meal of chicken alfredo catered by Bulldog Pizzeria, two people were inducted into the Hall of Fame - Garland Smith and Lori Lennen.
Henry Herrmann read a note Wanda Smith wrote about her son, Garland Smith.
Some of the speech included how Garland  learned to run equipment at a young age, how he loved to help people and how much fun he loved to have.
Wanda was a bit teary eyed as her son was remembered fondly for his service to the community, his huge heart, and his love of life.
Mike Lennen, Lori’s brother, spoke of the history of Coolidge and how their father saved a lot of the historical buildings from being torn down.
Mike said, “Our dad, Chuck, always had the hope and vision of beginning to preserve the history and restore some of the vitality that had once characterized Coolidge. The limestone buildings I knew as Conard’s Store, Christiansen Mercantile; the old Do-Boy Cafe; right beside the Do-Boy there was a building that had served as an IOOF hall and the Trexler Grocery Store. The premiere acquisition was Potter Opera House - which was being  systematically dismantled. As Lori put it, ‘Dad bought these old buildings to save them.’  And, that became one of her missions.”
He spoke highly of his sister being the mayor of Coolidge and how their grandmother Blanche Thornburgh was mayor of Coolidge in 1941.
“All of this has been accomplished in full accordance with our state Ad Astra per Aspera motto - to the stars through difficulties. Just in the last year, for example, there have been two tornados that almost, but not quite, touched down in Coolidge, but did come close enough to lift and damage new roofs on the log cabins, the B&B itself, Cousin Eddies, the Opera House, and the home where she lives. Somehow she is not discouraged by these challenges and very promptly figured out what needed to be done and moved forward. The roofs are all now repaired.”
Lori had returned for a short while planning to return to Arizona but life had other plans.
Lennen added, “One thing she wanted to make clear was that none of her efforts could have succeeded without the friendship, the encouragement, the help, and the support of many others - a number of whom are here this evening, that help run things.”
Joanice Jantz was also honored for her serving as Museum Director for 14 years.
Jantz recalls, “My favorite memory of the museum was the kids. I remember one young boy seeing a bone plate asking if it was a dish for macaroni. It just made me smile.”