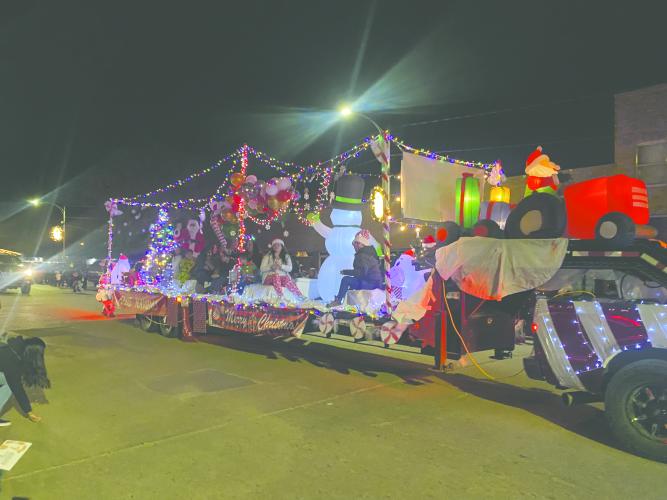 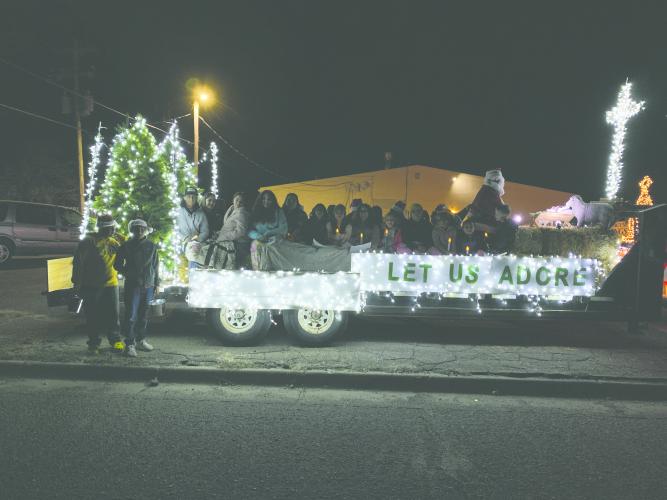 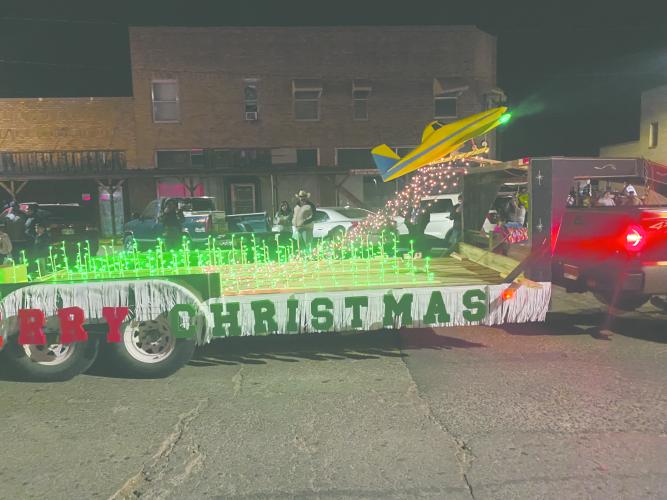 Majestic, fabulous, magical are a few words to describe the setting for the annual City of Syracuse’s Parade of Lights on Wednesday, December 1 on Main Street and the annual appearance of Santa at the Hamilton County Library.

Keeping with a long-standing tradition, Santa, greeted 296 individual kids and 157 families at the Hamilton County Library earlier in the afternoon.

The scene at the parking lot at Hilltop Lanes may have seemed chaotic with the nearly 20 entries trying to line up to parade down Main Street, but nonetheless, there was excitement in the air. People anxiously awaited the parade and cars were lined around the route from Highway 50 up to the high school. While they waited, the First National Bank served free chili to over 150 and hot chocolate was for sale in front of the Bulldog Pizzeria.

The sheriff, city and county fire departments along with the Hamilton County EMS let the parade goers know it was time with their lights and sirens, and while Santa may have been exhausted, he continued his duties by heading up the floats in the parade driven in a golf cart by Mayor Blake Upson.

The first place float was “On the Way to Bethlehem” by the Syracuse Christian Academy, promoting their musical December 14.

Second place was Fullmer Cattle’s float with the theme, “Custom Reindeer Raising” with two baby calves dressed up as reindeer. Santa and his helpers rode on a trailer, pulled by a pickup decorated as a present, lit up with lights as the ribbon.

Tied for third was St. Raphael Church and Syracuse Flying Service. The church’s float entitled, “Let us Adore” could be seen a long way away, with its largely lit cross at the front, numerous white lights and Christmas trees. Santa and the youth rode the float wearing Santa hats, waving battery candles.

The second third place winner was Syracuse Flying Service. The trailer had a runway of motion lights signifying crop dusting while the large plane appeared to be taking off over the tow vehicle. Traveling down the parade route, they handed out wooden airplane kits.

Mayors choice float by Skyland Grain was a replica of a grain elevator with spouts where candy was placed, sliding down onto the street for all to enjoy.

Other parade entries included the Junior High Cheerleaders with sponsor Candie Southern and mascot “Spike”, EZ Farms wagon with “From Our Fields to your Table Happy Holidays“, Bumper to Bumper, A+Auto and Diesel with an inflatable snowman in the bed of the pickup, Heath and Mia Boy on a motorcycle, Randy Braddock’s Model T with his nephew Eli Dikeman in the passenger seat, First Christian Church’s “the True Gift of Christmas”, and Dallie Lankford’s Parents As Teachers float, reminding us “Maybe Christmas doesn’t come from a store, maybe Christmas comes from memories, kindness, happiness, experiences” to name a few.

Following the parade, people young and old gathered at the park downtown which was beautifully decorated with small green wooden lighted Christmas trees and white lights strung vertically around the evergreen tree planted in memory of long serving city councilman, Gano Schmidt. The electrical box nearby was decorated with a large lighted candy cane, ready for Hamilton County’s first responders, who had the honor of lighting the tree, signifying the end to the festivities and the beginning of the City of Syracuse’s Christmas season.