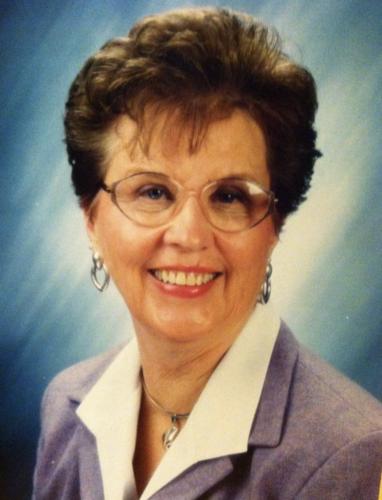 Sally C. (Goss) Scott, affectionately known as “Momo,” passed away at the age of 83 on May 17, 2020 after a brief battle with pancreatic cancer.

Sally was born to Jack and Esther Goss in Ottawa, Kansas.  She and her older brother Reed made life-long friends there, and Sally remained actively involved in planning high school reunions clear into her 80s!

In 1956, Sally met her husband Keith Scott at Kansas State Teacher’s College (now Emporia State University).  The two quickly became serious and were married two years later on a hot day in June.  Keith swept his new bride away to his bustling hometown of Syracuse, Kansas: population 2,000.  There they raised their four children among the familiarity of wheat fields, Main Street, and the infamous Dairy King.

After Keith’s retirement, the couple moved from Colorado to Arizona before finally settling down in Bella Vista, Arkansas, where now grandma and newly dubbed “Momo” would reside for the next 27 years.  She absolutely flourished there, making so many friends and so many plans that there was rarely a day on the calendar left unmarked. The woman had more energy and drive at 80 than most healthy people have at 25!  When attending oil-painting classes, volunteering at Wishing Springs Art Gallery, baking Grandma’s Famous Christmas Cookies, traveling on cruise ships down the Danube, or hustling friends and family at the card table, who has time to waste on a full night’s rest, or even on menial words like “hello”? (Momo was notorious for leaving this standard greeting off her telephone calls, especially if they pertained to computer or Facebook questions. Though Momo had a penchant for new technology, she never quite had the knack for it.)

In May of 2019, Momo moved back to Kansas to be closer to us: her kids, grandkids, and great-grandkids.  If one thing should be known about Momo, it wasn’t that she was a fantastic painter or gifted homemaker—though she was certainly those things—it was that she loved us fiercely.  She made her in-laws feel like her very own, she visited often, whether we were near or stationed far, she never walked in our homes without immediately cleaning out our refrigerators or whipping us up homemade meals.  She took us on shopping excursions and tropical vacations.  She called to check in regularly and asked how we were doing. She loved us.  She loved us so much. And that’s all we could ever ask for.

Momo is preceded in death by her husband, parents, brother, and granddaughter, Holly Hubbard.

It’s National EMS week. Emergency Medical Services are essential in our county. and we are grateful!  “We see people at some of the darkest or hardest times in their life and even though some don’t go the way we would like, others do and it is rewarding,... [More]