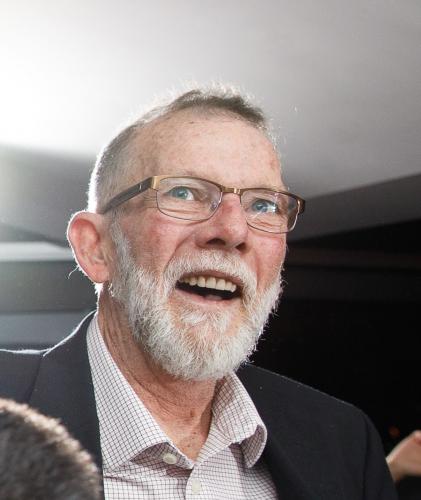 Douglas Eugene Wallace, (Doug), 67, was born July 22, 1954 in Garden City to Earl William Wallace and Velma E. (Schlegel) Wallace.  He died peacefully, August 22, 2021 at the Good Shephard Hospice House, Manhattan, KS.  He was surrounded by his family who were telling stories, crying, and laughing at his many adventures.  Doug had a knack for BS and making people laugh, but was a hard worker and only worked three main jobs in his life, all in Kansas - Schreiber Motors in Garden City; Fertilizer Manager for Syracuse Co-op for 30 years, and yard manager/dispatcher for Mead Lumber, Manhattan for 10 years.   He also helped deliver The Manhattan Mercury for over nine years, starting when his son, Jesse, first got a route.   Doug used this time to teach Jesse to drive, and sometimes their dog, Noodle, tagged along.

Doug was also a sports fan.   He coached youth baseball, softball, football, women's softball, and played baseball or co-ed softball well into his 50's.   He met his future wife, Becky, while playing softball and they enjoyed many years playing on co-ed teams and going to a few Royals games.  They married on January 22, 1988, in Syracuse, KS.   Other sports included golf where he was a board member of the Tamarisk Golf Course, Syracuse; football (Go Chiefs and KSU); watching college basketball (never missed a KU game); supporting family members swim/dive competitively; bowling; playing cards; and fishing.  He looked forward to going with the Jerry Schmidt family on their annual fishing trips, and especially this last year when his health was failing. A highlight was helping his grandson, Ryder, catch his first fish at the recent Wallace reunion.

During his years in Syracuse, Doug could be found building or fixing things in his garage, down at the Co-op, or golf course, or helping to remodel and landscape his and Becky’s century-old home.    After retirement, and bouts with cancer, Doug could be found watching The Andy Griffith Show or Diners, Drive-Ins and Dives, or in the kitchen cooking burritos, jerky, cookies, brownies, and even pie, or smoking and grilling outside.   He grew his own peppers and made the hottest salsa! Many people were recipients of his culinary products.   He was a fan of garage sales and loved making deals.   Daughter, Jordan, has followed in his footsteps.

In lieu of flowers Doug would appreciate donations for cancer research to Terry C. Johnson Cancer Research Center; St. Jude Children's Research Hospital; University of Kansas Medical Center; or donor's choice.   Memorials can be sent to Becky, or Irvin-Parkview Funeral Home, 1317 Poyntz, Manhattan, KS, 66502.   A Celebration of Life is being planned for October 23, 2021.