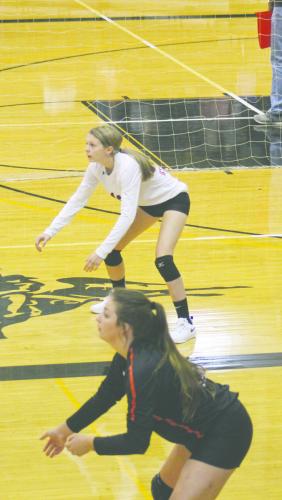 Finlay commented it was an honor to receive honorable mention this year. “With the amount of work and time I put in over this summer and season, it helped a ton to get where I did.” She feelss her teammates and coaches pushing her got her farther.

Heglin is very thankful that the team was able to have a season and finish it. “I am proud of the team for placing at every tournament and coming out of pool play.” She is also thankful for the girls that came out this season and worked hard and showed progress throughout the season. She added that the seniors will be missed, and the team is grateful for what they put into it.

Mitchell felt the team had to fight hard this year to be a good team since they did not have too many girls at summer workouts. “It was easier to just jump right in the last couple of seasons since we worked during the summer. She did not feel deserving of the award because she felt there were other girls who were busting their butts everyday in practice and getting better. “I think they all worked so hard and should be recognized for that.” She enjoyed the season, especially the Tribune game, “We all had so much fun and I felt like we were truly a team that game.”