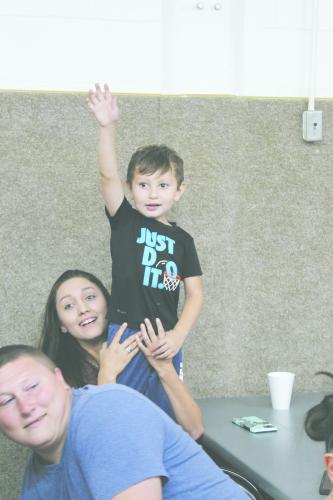 Attending the Merlin Kuder benefit Saturday, September 25 at the Hamilton County Fairgrounds was a gentle reminder of the many advantages of living in a small community.

People helping one of their own by enjoying a delicious homemade meal and desserts, purchasing homemade and donated auction items, all to help a young man battling cancer.

Kuder was diagnosed with stage one stomach cancer or adenocarcinoma, in the lining of his stomach, which makes it inoperable. He is self employed and trying to work and help to support his children, while taking treatments.

While friends were trying to outbid their neighbor, or simply watching the crowd, they could not help but laugh at the Miller boys, Auctioneer Mike, and his brothers Ron and Don, who were trying to get the most out of every item. An auction is never dull when the Miller boys are in the house.

Several young children apparently had picked out some items to bid on and were ready to bid with the number in hand. One was a basket full of toys, and Beckett Brown, son of Mike Brown and Daniela Valeta, held up his auction number two, driving up the bid, when he dropped his number, he did not miss a beat, he held his had even higher.

But he was outbid by a cute girl in front of him, Karey Hatcher’s granddaughter, Hadley Hatcher. Kuder’s daughter, Monroe, had her eye on the basket too, as did every other small child there. The crowd witnessed yet another generous gesture when Hadley shared a part of her basket with Monroe.

But the generosity did not end there, several bundles of meat were purchased and the recipient was offered a gift certificate to redeem their item, many were refused and given to Merlin.

Sometime later, there was another basket of items for auction which, again, appealed to the young children. The bidding began, and guess who was holding up the #2, trying to outbid everyone, Beckett again. This time he was bidding against Liam Finlay’s dad, Casey. Casey soon bowed out leaving Liam very disappointed. Beckett took a ring pop candy over to Liam, as a gesture to make him feel better.

Young and old alike caught the fever of giving Saturday night. The problems of the world were put on hold and several thousand dollars were raised to help the Kuder family.